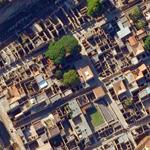 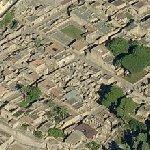 By kjfitz @ 2005-09-22 21:29:26
@ 40.805968, 14.347555
Naples, Italy (IT)
Herculaneum (modern Italian Ercolano) was an ancient Roman town of the Italian region of Campania. It is today most famous for having been preserved, along with Pompeii, in the eruption of Mount Vesuvius beginning on August 24, A.D. 79 that destroyed the towns, burying them in ash that has hardened into volcanic tufa. A pyroclastic flow preceded the main eruption, killing many residents, whose bodies were encased in ash that preserved their last moments in casts. In contrast to Pompeii, Herculaneum was a smaller town with a wealthier population at the time of its destruction.
Links: www.roman-empire.net
2,001 views

DonMartini
@ 2006-03-29 07:16:48
You might remove "the other Pompeii" from the title. In fact there were several cities/villages buried by the eruption of 79 AD. It looks a little bit 'simple' to suggest that Herculaneum is the other Pompeii.