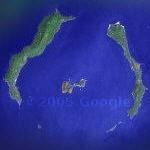 Long inhabited, the British took possession of the islands, then handed them to France in 1904. Roume is said to have inspired the novel Treasure Island, and was known for slave trading, while Tamara was a prison.

The islands are best known for their beaches and forested interiors and are popular with tourists. Ferries sail to the Los from Conakry.
Links: en.wikipedia.org
1,251 views