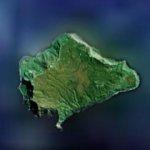 By gamma @ 2007-03-10 12:34:18
@ -37.299046, -12.677708
Inaccessible Island, Saint Helena (SH)
Inaccessible Island was discovered by the Dutch ship t'Nachtglas in 1652, and named after it, with the phrase "inaccessible" added in parentheses after the name as the sailors who landed were unable to get further inland than the beach. The latter name has persisted to this day, reflecting both the difficulties in visiting this island and the difficulties in reaching its interior.

After Corporal Glass and his family settled on Tristan da Cunha in 1816, goats and pigs were put ashore to provide a source of meat. They were still there when the German Stoltenhoff brothers landed in 1871. Their aim was to make their fortune from sealing on the island, but they had to be rescued by HMS Challenger in 1873, when she called briefly to examine the flora and fauna. The goats and pigs had barely kept them alive, and their adventures are related in the book "Shelter from the Spray".
Links: www.bt.com, en.wikipedia.org
2,589 views