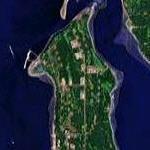 By kjfitz @ 2005-08-03 13:49:35
@ 48.066092, -122.731361
Indian Island, Washington (WA), US
A munitions depot has been operated on Indian Island since World War Two, when in addition to ordnance, the depot was used for the construction and maintenance of defensive netting, which was strung across harbors on the West Coast to catch enemy submarines and torpedoes. Located near Hadlock, off the Olympic Peninsula south of Port Townsend, the 2,000 acre depot covers the island, and has 98 buildings and 113 munitions igloos. It is considered a detachment of the nearby Bangor Sub Base.
Links: clui.org
804 views

jbottero
@ 2006-06-19 23:34:35
There has been a lot of speculation about specialized torpedoe testing at this location, and there is a level of security there which exceeds that of other local installations. Spend too much time parked near the fence, and within 5 or 10 minutes, a Humve will cruise by slowly...