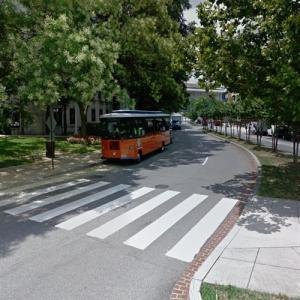 By jdubble07 @ 2018-12-03 13:17:33
@ 38.8985076, -77.0537781
Washington, Washington, DC (DC), US
Jamal Khashoggi was a Saudi Arabian journalist who last worked for The Washington Post. On 2 OCT 2018, Khashoggi entered the Saudi Arabian embassy in Istanbul, believing he was going to obtain documents needed prior to his wedding. Once inside, Khashoggi was murdered, in a premeditated attack, by a team of 15 Saudi operatives, including a forensic pathologist and members of the Saudi Royal Guard. Based upon evidence, including recordings made by Khashoggi's Apple Watch during the attack, the attack was planned an ordered by Saudi Prince Mohammed bin Salman, who has denied the claims.

In response, elected officials of the Foggy Bottom and West End neighborhoods of Washington, D.C. voted to change the name of New Hampshire Ave NW, which passes in front of the Saudi Embassy, to Jamal Khashoggi Way to honor the murdered journalist and show support by the District of Columbia.
Links: www.cnn.com, en.wikipedia.org
166 views