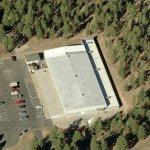 The five-day storm dumped 54 inches of snow and 2 inches of rain, making it the second worst winter storm in the city's recorded history.

The rink was named after a young local hockey player who was killed by a drunk driver on I-17 near New River, Arizona.

In less than 10 months, the building was rebuilt and reopened to the public.
Links: azdailysun.com
623 views