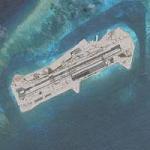 Johnston Atoll is a 2.8 km² atoll in the North Pacific Ocean at 16°45′ N 169°30′ W, about one-third of the way from Hawai'i to the Marshall Islands. Johnston Island and Sand Island are natural islands, which have been expanded by coral dredging. North Island (Akau) and East Island (Hikina) are artificial islands formed from coral dredging.

The island was named for Captain James Johnston who claimed its official discovery on December 10, 1807. The Johnston Atoll was claimed by both the United States and the Kingdom of Hawaii in 1858. The Atoll's guano deposits, mined by U.S. interests operating under the Guano Islands Act, were worked until depletion at about 1890. On July 29, 1926, President Calvin Coolidge established the Johnston Atoll as a Federal bird refuge and placed it under the control of the U.S. Department of Agriculture. On December 29, 1934 President Franklin D. Roosevelt transferred control of Johnston Atoll to the U.S. Navy to establish an air station and also to the Department of the Interior to administer the bird refuge. In 1936, the U.S. Navy began developing a seaplane base, an airstrip and refueling facilities on the atoll. It was designated as a Naval Defensive Sea Area and Airspace Reservation on February 14, 1941.

Johnston Atoll was shelled by Japan in World War II. The area was subsequently a U.S. nuclear weapons test site and later the site of the Johnston Atoll Chemical Agent Disposal System (JACADS).

Between 1958 and 1975 several sounding rockets were launched from Johnston Island. There were also rockets launched for nuclear tests related to a project called Starfish Prime.
Links: en.wikipedia.org
4,458 views