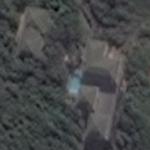 The royal couple wanted to create an ecologically responsible vacation resort, including a hotel and several luxury vacation houses, but the project ended in a mire of controversy involving corruption, embezzlement, murder, construction delay, loss of fishing area for the local population. It all coincided with several other scandals involving the royal family, including their suit against Associated Press and many about their personal finances.

In 2012, when the property was sold back to Machangulo SA, Dutch prime minister Mark Rutte stated that the royals had no involvement with the project anymore.
Links: en.wikipedia.org
600 views