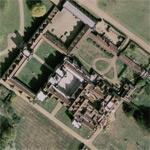 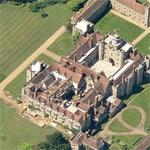 By neotrix @ 2009-04-09 00:17:52
@ 51.266137, .205373
Sevenoaks, United Kingdom (GB)
Knole is an English stately home in the town of Sevenoaks in west Kent, surrounded by a 1,000-acre (4.0 km2) deer park. It is remarkable in England for the degree to which the early 17th-century appearance of its state rooms is preserved: the interiors of many houses of this period were altered later on. The surrounding deer park is also a remarkable survivor, having changed little over the past 400 years except for the loss of over 70% of its trees in the Great Storm of 1987.

The house was built by Thomas Bourchier, Archbishop of Canterbury, between 1456 and 1486, on the site of an earlier house belonging to James Fiennes, the Lord Say and Sele who was executed after the victory of Jack Cade's rebels at the Battle of Solefields.
Links: en.wikipedia.org, www.nationaltrust.org.uk, moviemaps.org
1,598 views