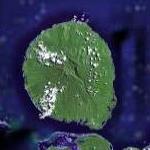 Kolombangara is an island in the New Georgia Islands group of the Solomon Islands. Almost perfectly round in shape and about 15 km across, the island is a stratovolcano that reaches an altitude of 1,770 meters. The island forms part of the southern boundary of the New Georgia Sound; to the northwest the Vella Gulf separates it from Vella Lavella and Gizo, while to the southeast New Georgia lies across the Kula Gulf.

During World War II the island and the waters around it were the scene of fighting; the Japanese used an airstrip on some flat ground at Vila on the south shore of the island, and in May 1943 based several military units on the island, under the command of Major General Noboru Sasaki, in an attempt to establish a defense line through the Central Solomons. Naval battles nearby included the battle of Kula Gulf and battle of Kolombangara. US forces "leapfrogged" Kolombangara to land on Vella Lavella, and the Japanese evacuated Kolombangara between 23 September and 4 October 1943.
Links: en.wikipedia.org
1,310 views