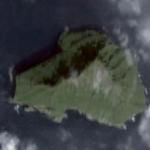 Lítla Dímun is a small island between the islands of Suðuroy and Stóra Dímun in the Faroe Islands. It is the smallest of the main 18 islands, being less than 1 sq km in area, and is the only uninhabited one. The island can be seen from the villages Hvalba and Sandvík.

The southern 1/3 of the island is sheer cliff, with the rest rising to the mountain of Slættirnir (413 m). The island is only inhabited by sheep and seabirds. Getting ashore is difficult, and can be performed only in perfect weather. The cliffs can be climbed with the aid of ropes placed by the sheep owners.

The island features as the site of a battle in the 13th century work Færeyinga Saga (Saga of the Faroese).