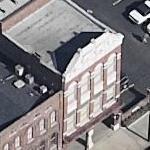 The Lexington Opera House was built in 1886 following the destruction by fire of the earlier opera house. Designed by the noted theatrical architect Oscar Cobb of Chicago, the opera house was opened on August 19, 1887 with a production of "Our Angel" by the Lizzie Evans Stock Company. The three-story building originally seated 1,250 people and had two balconies and two boxes on either side of the stage. The interior of the opera house was lavishly decorated in Turkish morocco and each box was equipped with its own hat rack, cane and umbrella holder, and springs to help people enter their seats. An 1893 article in The Kentucky Leader describes the house as one of the "costliest, handsomest and most convenient Thespian temples in the South, an object of cherished pride in the city." Following the advent of motion pictures the opera house fell into decline. The building was restored during the early 1980s and is now used again for theatrical and musical performances.

[photo]
Stage of Lexington Opera House, c1898
Art Work of the Blue Grass Region of Kentucky, courtesy of the Blue Grass Trust for Historic Preservation
Over the years the opera house hosted many large and elaborate performances. A production of the "Henley Regatta" in 1890 required a flooding of the stage. In 1893, approximately 100 animals and a mile-long parade were used for the performance of "A Country Circus." In 1904 a production of "Ben Hur" involved an on-stage chariot race. These plays alone should attest to the popularity of opera and the lavish performances that took place in the building. Many notables have performed in the opera house including: John Phillip Sousa, Mrs. Tom Thumb, Will Rogers, Mae West, and the Marx Brothers.
Links: www.cr.nps.gov
1,385 views