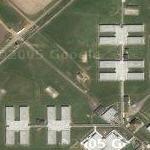 By kjfitz @ 2005-06-23 16:59:30
@ 30.955224, -91.594326
Angola, Louisiana (LA), US
The Louisiana State Penitentiary (also known as Angola and "The Farm") is a prison in Louisiana operated by the Louisiana Department of Corrections. The prison is the largest maximum security prison in the United States with 5,000 inmates and 1,800 staff members. It is located on an 18,000 acre (73 km²) property that was previously the Angola and other plantations owned by Isaac Franklin in unincorporated West Feliciana Parish, close to the Mississippi border. Angola is surrounded on three sides by the Mississippi River.
Links: en.wikipedia.org
10,127 views

bonjbrown
@ 2005-08-22 10:39:27
Click on the image and zoom out to find out why they call this prison "The Farm." The Louisiana State Penetentiary is one of the nation's largest and most notorious correctional facilities. The grounds are surrounded on three sides by the Mississippi (which periodically floods the grounds) As you scan about the farm you will see that there are several more units than the main unit in the center. See this page http://www.corrections.state.la.us/lsp/photos.htm for ground imagery.

Anonymous
@ 2006-04-10 22:23:14
The maximum security unit (death row inmates and other high security risk inmates) is oddly located in the building directly adjacent to the main entrance gate into the complex.

Anonymous
@ 2020-08-23 14:25:27
As a child my dad was a chaplain 1955-1958. We lived on the compound it what was called the horseshoe. Looking for photos of those houses. Later we moved to a house that had been the superintendent’s house until the move to a different one. Looking for photos of that especially. My sisters don’t remember the second house. Any help will be much appreciated. Beth Bennett-Hill