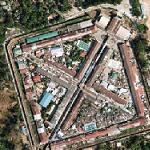 By Mike1989 @ 2013-03-12 14:16:20
@ 14.380198, 121.029414
Muntinlupa, Philippines (PH)
The New Bilibid Prison in Muntinlupa City, Philippines, is the main insular penitentiary designed to house the prison population of the Philippines. It is maintained by the Bureau of Corrections (BuCor) under the Philippine Department of Justice. As of October 2004, it has an inmate population of 16,747. The penitentiary had an initial land area of 551 hectares. One hundred four hectares of the facility were transferred to a housing project of the Department of Justice. The Bureau of Corrections has its headquarters in the NBP Reservation.
Links: en.wikipedia.org
9,920 views