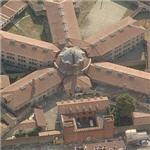 However about 40 prisonners are still imprisonmed in Saint-Michel, in a wing transformed in a partial-release centre.

The prison which looks like a castle is composed of five wings of three levels. The wing number 3 was the one with the disciplinary cells (first level), the isolation ones and a few ones for teenagers.

In the future, the jail Saint-Michel should be transformed into a cultural centre.
Links: urban-resources.net
9,475 views