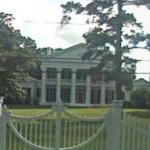 It was declared a National Historic Landmark in 1983.

Madewood was featured in the movies, A Woman Called Moses with Cicely Tyson, and Sister, Sister starring Eric Stoltz and Jennifer Jason Leigh.

In 2007 it was reported to be an intended site of filming for Clinton Kelly's Mind Your Manners for TLC, The Learning Channel.

Today it is run as a tourist attraction and a bed and breakfast.
Links: en.wikipedia.org
996 views