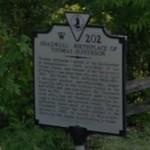 His father, Peter Jefferson (1708-1757), a surveyor, planter, and officeholder, began acquiring land in this frontier region in the mid-1730s and had purchased the Shadwell tract by 1741. Peter Jefferson built a house soon after, and the Shadwell plantation became a thriving agricultural estate. Thomas Jefferson spent much of his early life at Shadwell.

After the house burned to the ground in 1770, he moved to Monticello, where he had begun constructing a house.
Links: en.wikipedia.org
755 views