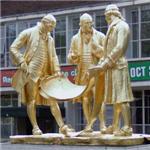 By kjfitz @ 2010-03-11 14:10:43
@ 52.478656, -1.90858
Birmingham, United Kingdom (GB)
The gilded bronze statue of Matthew Boulton, James Watt and William Murdoch by William Bloye and Raymond Forbes-Kings stands on a plinth of Portland stone, outside the old Register Office on Broad Street in Birmingham, England.

It is known locally as The Golden Boys after its colour, or The Carpet Salesmen after the partially-rolled-up plan of a steam engine which they are examining.

All three men were members of the Lunar Society.

The statue was restored and re-gilded, and replaced in its old position in September 2006.

It is planned to be relocated; suggested sites including 'across the road' in Centenary Square or at Millennium Point in Eastside.
Links: en.wikipedia.org
769 views