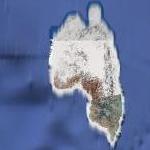 By kkeps @ 2010-02-05 17:47:06
@ 79.92247, -99.382324
Meighen Island, Canada (CA)
Meighen Island is an uninhabited Canadian arctic island in Nunavut, Canada. Located at 79°55'N 99°30'W, it measures 955 km2 (369 sq mi) in size and is topped with an icecap. The island is continuously icebound, and its northwestern coast faces onto the open Arctic Ocean. Meighen Island was discovered in 1916 by Vilhjalmur Stefansson and later named after Arthur Meighen, Canadian prime minister. Unlike many Canadian arctic islands, no traces of Inuit or Thule camps have been found, suggesting the island has never been occupied, and this is likely due to its extreme northern latitude.
Links: en.wikipedia.org
339 views