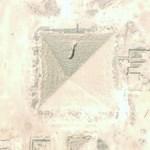 Richard William Howard Vyse, who first visited Egypt in 1835, discovered in the upper antechamber the remains of a wooden anthropoid coffin inscribed with Menkaure's name and containing human bones. This is now considered to be a substitute coffin from the Saite period, and radiocarbon dating on the bones determined them to be less than 2,000 years old[citation needed], suggesting either an all-too-common bungled handling of remains from another site, or access to the pyramid during Roman times. Deeper into the pyramid Vyse came upon a beautiful basalt sarcophagus, rich in detail with a bold projecting cornice. Unfortunately, this sarcophagus now lies at the bottom of the Mediterranean, sinking on October 13 1838, with the ship Beatrice, as she made her way between Cartagena and Malta, on the way to Great Britain.[1] It is one of only a handful of extant Old Kingdom sarcophagi. The anthropoid coffin, however, was successfully transported on a separate ship and may be seen today at the British Museum.
Links: en.wikipedia.org
1,031 views