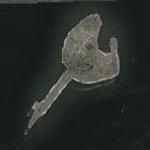 Seldom inhabited, the islands held great allure for the military, starting in the War of 1812, when a blockhouse was erected on Great Mill Rock as part of the defense of New York Harbor. In the late 1800's, the Army Corps of Engineers established facilities on the islands for the preparation of explosives, which would be used to clear obstacles in the East River.

In 1890, debris from one such blast was used to fill in the gap between Great Mill and Little Mill Rocks, producing the single island you see today. The island was acquired by the city's Parks Department in 1953, its buildings demolished and trees planted.

In 1885 the US Army detonated 300,000 lb (136,000 kg) of explosives on adjoining Flood Rock; that island had been the most treacherous impediment to East River shipping. It is most likely the most forceful explosion in New York City history and was felt as far away as Princeton, New Jersey. The decimated Flood Island was used to fill the space between Great and Little Mill Islands, producing Mill Rock.
Links: en.wikipedia.org
999 views