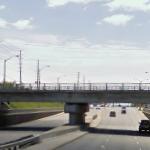 By kkeps @ 2010-07-05 19:43:44
@ 43.571598, -79.640965
Mississauga, Canada (CA)
The Mississauga train derailment of 1979 occurred on Saturday, November 10, 1979, in Canada, when a 106-car Canadian Pacific freight train carrying explosive and poisonous chemicals from Windsor, Ontario was derailed near the intersection of Mavis Road and Dundas Street in Mississauga, Ontario. As a result of the derailment, over 200,000 people were evacuated in what was then the largest peacetime evacuation in North America up until the New Orleans evacuation of 2005. It was the last explosion in the Greater Toronto Area until the Sunrise Propane blast in 2008. There were no deaths resulting from the spill.
Links: en.wikipedia.org
943 views