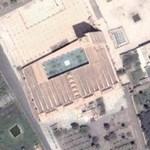 Its style is a Almohad, but has a good deal of simple Andalucian elements added to it. The minaret rises 77 metres above the ground, while the mosque is sizeable by itself. While it has a strict appearance in red stone today, it is believed that it originallywas covered with plaster. There have been plans of renovating the Koutoubia into this style.
Links: lexicorient.com, en.wikipedia.org
588 views