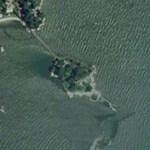 By DonMartini @ 2006-10-28 05:23:21
@ 41.037057, -73.505573
Stamford, Connecticut (CT), US
Caritas Island Fairfield County, Conn.
$25 million plus (A$33.4 million, C$28.3 million, €20.8 million, £14.3 million, Rs1.1 billion)
It's a rare luxury to have a private island an hour's drive from Manhattan. This four-acre island is connected to Connecticut via a private road, and features a 14,000-square foot stone manor house, built in 1906 for members of the Phelps Stokes family. The mansion has a marble entryway, herringbone oak floors, marble skirting, a two-story gourmet kitchen and library with a cathedral ceiling. The estate includes a lap pool, saltwater pool, 200-foot deepwater dock, guest cottage, caretaker's cottage and gardens.
Links: www.forbes.com, www.zillow.com, www.your-dream-island.com
6,780 views

The four acre Caritas Island, also known as Greenway Island, located on Long Island Sound, just off the Connecticut coast has a storied history. Originally this was a residence of another very noted financial family, Anson Phelps Stokes Jr. and J. G. Phelps Stokes, descendent of the family who started the Phelps-Dodge mining company. Artist Rockwell Kent stayed here for a time when it was owned the Phelps Stokes family. On March 19, 2007, Phelps-Dodge Corporation was acquired by Freeport-McMoRan and now operates under the name Freeport-McMoRan Copper & Gold Inc.

The estate today includes a lap pool, saltwater pool, 200-foot deepwater dock, guest cottage, caretaker’s cottage and gardens. The 14,159 square foot stone and stucco English Manor house was built in 1906 and has 11-bedrooms. The island can be reached by boat or by a private gated causeway. It was listed for sale in 2006 with an asking price of $25 million via Sotheby's International Realty. As of January 14, 2012, the home is currently for sale for $18,900,000. The home has annual property taxes ranging from $161,702 to $216,006.

It was recently featured on the homepage of Yahoo's website as one of "5 Posh Private Islands for Sale."