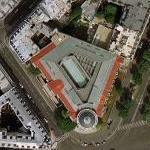 The museum which was first located at Lyons in 1879 and was handed over to the state and transferred to Paris in 1885, was founded by Émile Étienne Guimet, an industrialist. Devoted to travel, Guimet was in 1876 commissioned by the minister of public instruction to study the religions of the Far East, and the museum contains many of the fruits of this expedition, including a fine collection of Japanese and Chinese porcelain and many objects relating not merely to the religions of the East but also to those of Ancient Egypt, Greece and Rome.
Links: en.wikipedia.org
546 views