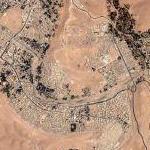 The Mzab Valley was listed as a UNESCO World Heritage Site in 1982, as an intact example of traditional human habitat perfectly adapted to the environment.
Links: en.wikipedia.org
571 views