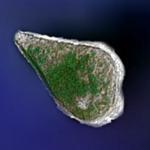 Navassa Island or La Navase in Haitian Kreyòl is a small, uninhabited island in the Caribbean Sea. The government of the United States claims the island as an unincorporated territory of the United States, and it is administered by the U.S. Fish and Wildlife Service. However, California businessman Bill Warren has advanced a claim against the island (using the Guano Islands Act), and it is also claimed by Haiti.

In 1504, Christopher Columbus, stranded on Jamaica, sent some crew members by canoe to Hispaniola for help. They ran into the island on the way, but it had no water. They called it Navaza, and it was avoided by mariners for the next 350 years.

It was claimed by Peter Duncan, an American sea captain, in 1857 under the Guano Islands Act of 1856 because of its guano deposits, the third island to be claimed under this act. These deposits were actively mined from 1865 to 1898. Haiti protested the annexation and claimed the island, but the U.S. rejected the claim.
Links: en.wikipedia.org
1,123 views