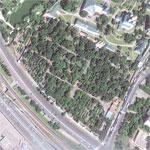 Under Soviet rule, burial in the Novodevichy Cemetery was second in prestige only to burial in the Kremlin Wall Necropolis. Since the fall of the Soviet Union, the Kremlin Wall is no longer used for burials and the Novodevichy Cemetery is used for only the most symbolically significant burials. For example, in April 2007, within one week both the first President of the Russian Federation Boris Yeltsin and world renowned cellist Mstislav Rostropovich were buried there.

In 2001 there was an attempt to move ballerina Anna Pavlova's remains to the Novodevichy Cemetery in accordance with her requests and after considerable controversy.
Links: en.wikipedia.org
702 views