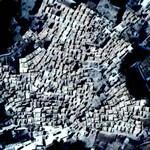 The first records about Ghadames exist not before the Roman period, when there were troops in the town from time to time. The Roman name for the town was Cydamus. During the 6th century, a Bishop lived in the oasis, after the population have been converted to Christians by the people of the Byzantine Empire. During the 7th century, Ghadames was ruled by the Muslim Arabs. The population quickly converted to Islam. Ghadames played an important role as base for the Trans-Saharan trade until the 19th century.
Links: en.wikipedia.org
957 views