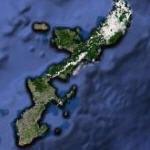 By kjfitz @ 2011-02-03 16:32:48
@ 26.474261, 127.96875
Okinawa, Japan (JP)
Okinawa Prefecture is one of Japan's southern prefectures, and consists of hundreds of the Ryukyu Islands in a chain over 1,000 km long, which extends southwest from Kyūshū (the southwesternmost of Japan's main four islands) to Taiwan. Okinawa's capital, Naha, is located in the southern part of the largest and most populous island, Okinawa Island which is approximately half-way between Kyūshū and Taiwan. The disputed Senkaku Islands (Mandarin: Diaoyu Islands) are also administered as part of Okinawa Prefecture at present.
Links: en.wikipedia.org
1,660 views