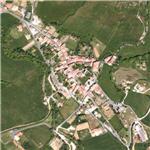 Bugarach, population 189, is a peaceful farming village in the Aude region, southwestern France and sits at the foot of the Pic de Bugarach, the highest mountain in the Corbières wine-growing area.

But in the past few months, the quiet village has been inundated by groups of esoteric outsiders who believe the peak is an "alien garage".

According to them, extraterrestrials are quietly waiting in a massive cavity beneath the rock for the world to end, at which point they will leave, taking, it is hoped, a lucky few humans with them.

Most believe Armageddon will take place on December 21, 2012, the end date of the ancient Maya calendar, at which point they predict human civilisation will come to an end. Another favourite date mentioned is 12, December, 2012. They see Bugarach as one of perhaps several "sacred mountains" sheltered from the cataclysm.
Links: www.telegraph.co.uk
1,175 views