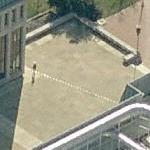 By kjfitz @ 2012-04-02 19:58:59
@ 38.98327802, -76.48439358
Annapolis, Maryland (MD), US
The Michelson–Morley experiment was performed in 1887 by Albert Michelson and Edward Morley at what is now Case Western Reserve University in Cleveland, Ohio. Its results are generally considered to be the first strong evidence against the theory of a luminiferous aether and in favor of special relativity.

While teaching at his alma mater in 1877, the U.S. Naval Academy in Annapolis, Michelson conducted his first known successful light speed experiments as a part of a classroom demonstration.
Links: en.wikipedia.org
1,109 views