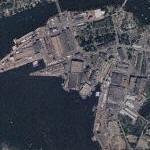 It is also the home of "The Castle", a former military prison which derives its name from the resemblance to a medieval castle. This building was the primary prison for the Navy and Marine Corps, as well as housing many German U-Boat crews after capture, until it closed in 1974.