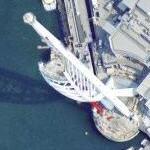 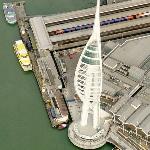 By kjfitz @ 2006-02-04 00:27:47
@ 50.795857, -1.10893
Portsmouth, United Kingdom (GB)
The Spinnaker Tower is a 170m (558 ft) high tower situated in Portsmouth, United Kingdom. The tower is the centrepiece of the redevelopment of Portsmouth Harbour, which was supported by a large National Lottery grant. The tower, designed by Scott Wilson, celebrates Portsmouth's maritime tradition, a theme central to the design. After several years of delays and a massive budget overspend, it was officially opened on 18 October 2005, and is expected to draw many new tourists to the area.
Links: en.wikipedia.org
1,057 views