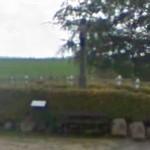 The legend says he was murdered in a barn on this spot. The king was resting here after being on a hunting trip.

One of the nation's most powerful noblemen, Marsk Stig Andersen Hvide, and 8 fellow men were tried one year after and were outlawed. A knight, Arved Bengtsen, was the only one convicted for the murder.
Links: en.wikipedia.org
785 views