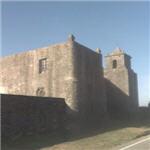 By kjfitz @ 2011-02-04 11:50:07
@ 28.648241, -97.382283
Goliad, Texas (TX), US
The Presidio Nuestra Señora de Loreto de la Bahía, known more commonly as Presidio La Bahia, or simply La Bahia is a fort constructed by the Spanish Army that became the nucleus of the city of Goliad, Texas, United States. Originally founded in 1721 on the ruins of the failed French Fort Saint Louis, the presidio was moved to a location on the Guadalupe River in 1726. In 1747, the presidio and its mission were moved to their current location on the San Antonio River. By 1770, the presidio had been rebuilt in stone and had become "the only Spanish fortress for the entire Gulf Coast from the mouth of the Rio Grande to the Mississippi River". A civilian settlement, modern-day Goliad, sprang up around the presidio in the late 18th century, and the area was one of the three most important in Spanish Texas.
Links: en.wikipedia.org
1,002 views