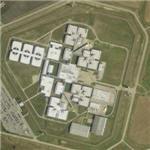 By kjfitz @ 2010-05-18 08:49:13
@ 28.774393, -97.83411
Kenedy, Texas (TX), US
The John B. Connally Unit is a maximum-security prison for males located in unincorporated Karnes County, Texas, United States. It is located on Texas State Highway 181 2 miles (3.2 km) south of the city of Kenedy. The prison, with about 813 acres (329 ha) of space, is operated by the Correctional Institutions Division of the Texas Department of Criminal Justice, administered as within Region IV. The unit is named for former Governor and United States Treasury Secretary John B. Connally, Jr.

The Texas 7 escaped from the prison on December 13, 2000. One of those escapees, Michael Rodriguez, has been executed at the Huntsville Unit on August 14th 2008, for the killing of Irving Police Officer Aubrey Hawkins and another, Larry Harper committed suicide.
Links: en.wikipedia.org
3,344 views