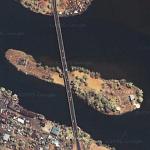 By romulusnr @ 2005-11-09 15:54:49
@ 6.319436, -10.802243
Monrovia, Liberia (LR)
Providence Island is the site of the first non-African settlement in Liberia. In 1822, freed American slaves were sent to colonize the land under the direction of the controversial American Colonization Society, which spearheaded the idea of shipping "free people of color" back to Africa. While the motiviations behind this idea are unclear, the sentiment was rekindled in the early 1920s with Marcus Garvey's Black Star Line.
Links: www.liberian-connection.com
1,463 views