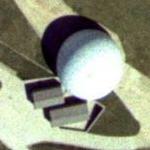 By kjfitz @ 2007-02-16 17:48:45
@ 52.892882, 1.400695
Trimingham, United Kingdom (GB)
Trimingham is home to RAF Trimingham, a remote air defence radar station. In November 2006, the The Ministry of Defence admitted that the Type 93 radar spinning inside the dome had been out of alignment between November 2005 and February 2006, causing car engines and lights to cut out, and speedometer dials swung up to 150mph as motorists drove past. Having previously denied problems, the MoD said it will consider claims for compensation after an inquiry found the radar was "out of alignment". A local garage owner who runs the nearest garage at Mundesley, said he dealt with 30 calls over a couple of months.
Links: en.wikipedia.org
910 views