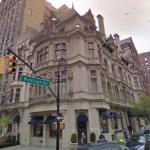 "The Gertrude Rhinelander Waldo Mansion is a massive French Renaissance Revival mansion in New York City. It was originally designed in the 1890s by Kimball & Thompson and built in 1898. It is located at 867 Madison Avenue on the south-east corner of 72nd Street, Manhattan.

Gertrude Rhinelander Waldo, the New York heiress who commissioned the mansion, never actually moved in . . . The building remained vacant until 1921"

Shortly after Ralph Lauren purchased the building in 1983, its value was a mere $6.4 million. In 2005 the building was worth $80 million!