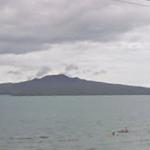 By kjfitz @ 2009-08-21 13:32:10
@ -36.8122, 174.800584
Auckland, New Zealand (NZ)
Rangitoto Island is a volcanic island in the Hauraki Gulf near Auckland, New Zealand. The 5.5 km wide island is an iconic and widely visible landmark of Auckland with its distinctive symmetrical shield volcano cone rising 260 metres (850 ft) high over the Hauraki Gulf. Rangitoto is the most recent and the largest (2311 hectares)[3] of the approximately 50 volcanoes of the Auckland Volcanic Field. It is linked by a natural causeway to the much older, non-volcanic Motutapu Island and is separated from the mainland of Auckland's North Shore by the Rangitoto Channel.
Links: en.wikipedia.org
691 views