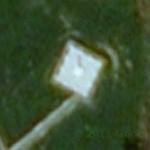 
The cemetery grounds were assigned to the United Kingdom in perpetuity by King Albert I of Belgium in recognition of the sacrifices made by the British Empire in the defence and liberation of Belgium during the war.


This cemetery is unusual for being both a cemetery and a memorial; additionally, it has no gravestones, choosing instead to commemorate the men who died on the Cross of Sacrifice itself.

This cemetery should be the smallest WW 1 CWGC cemetery
Links: en.wikipedia.org
421 views