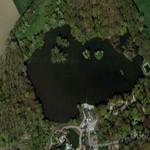 The officer in charge of tunneling and laying the mine at Hooge was Lieutenant Geoffrey Cassels, and the work was completed by 175 Tunnelling Company in only five and a half weeks. Compared to the months of preparation before the mines used in the Battle of Messines in 1917, this was quick work indeed. The first attempt at tunnelling for the mine, starting from within a stable, failed, because the earth encounterred was too sandy.

A second shaft was sunk from the ruins of a gardener's cottage nearby. The tunnellers reached blue clay, and could then make good progress. The main tunnel was in the end 190 feet long, with a branch off this after about 70 feet, this second tunnel running a further 100 feet on. The intention was to blow two charges under concrete fortifications which the Germans were constructing, although the smaller tunnel was found to be somewhat off course.

The mines were laid using, for the first time, the explosive ammonal - as well as gunpowder and guncotton. The largest mine of the war thus far was blown on the 19th of July at 7 p.m. - but not before a German shell had severed the detonator wires only a few minutes before. They had to be rapidly repaired. The crater made was estimated at 120 feet wide and 20 feet deep. The crater was taken by men from the 1/Gordon Highlanders and 4/Middlesex. Ten of the latter, however, had been killed by debris from the mine as they waited in advanced positions.

Lt. Cassels was almost arrested shortly afterwards because of this, although subsequently he was awarded the Military Cross, and praised for his efforts. The German losses from the mine were estimated to be several hundred.
Links: www.ww1battlefields.co.uk
796 views