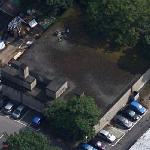 By Mike1989 @ 2013-03-13 05:16:50
@ 51.438985, -0.934577
Earley, United Kingdom (GB)
The Region 6 War Room is a nuclear bunker dating from the early days of the cold war, on the Whiteknights Park campus of the University of Reading in the English town of Reading. It is one of a number of such Regional War Rooms built during the 1950s and designed to co-ordinate civil defence in the event of an attack on the country using conventional bombs or atom bombs.

In the event of war, the war room would have housed the Regional Commissioner and his staff who would have directed the strategic response to air raids throughout the counties of Berkshire, Buckinghamshire, Dorset, Hampshire, Oxfordshire, and the Isle of Wight. The Regional Commissioner had the authority to assume the full powers of the central government in this region if contact with central government was lost.

The war room takes the form of a two level windowless building, with the upper level being above ground level and protected by massive concrete walls, while the lower level is below ground level. The building is surmounted by towers containing filtration equipment. The bunker was designed to cope with attacks by weapons of the type used during the atomic bombings of Hiroshima and Nagasaki during World War II.

The development of the hydrogen bomb and the expectation of mutually assured destruction meant that the war room was both inadequately protected, and seen as too small to support the large live-in staff that would be needed after a major nuclear strike. Its principal responsibilities were transferred to a new Regional Seat of Government RSG-6 at Warren Row near Maidenhead. Some sources suggest that it continued in use as a civil defence communications centre for some period after this transfer.
Links: en.wikipedia.org
727 views