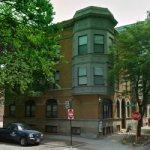 "The home, at 832 E. 57th Street, was where Reagan survived a near-fatal bout of pneumonia in 1915 and he has written fondly of playing in the Hyde Park neighborhood with his brother and others."

"But the University of Chicago has recently purchased the apartment building and they have announced plans to raze it and make it a parking lot."
Links: www.dailymail.co.uk
700 views