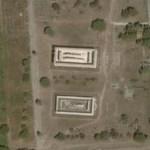 By DonMartini @ 2006-06-06 04:59:32
@ 40.419434, 15.00608
Paestum, Italy (IT)
Originally called Poseidonia, the city of Neptune, (later becoming Paestum under the Romans), the ruins are located on the alluvial plain of the River Sele in the heart of Magna Graecia. This area of southern Italy was colonised by the ancient Greeks in the 6th century BC, when Doric temples were constructed to honour the patron gods of the town: Neptune, Hera and Athena.

The most impressive of the three temples is the one dedicated to Neptune at the southern edge of the site. Built in the 5th century BC, it is the largest of the three at 60 metres long and 24 metres wide, with 14 fluted columns at the side and six at the end. Its stone is golden and when it catches the evening sun, the columns and entablature glow pink.

Paestum was famous for its roses (which flowered twice a year) and its violets. The flowers were made into essential oils famous throughout the ancient world. Such sweet-smelling lifestyles were not destined to last. Ravaged by malaria, impoverished by dwindling populations, the Saracens finally finished off the town in 877AD. Its buildings were swallowed by encroaching vegetation and the ruins were only brought to light by builders of a coach road in the 18th century, who proceeded to bulldoze through the ancient Greek theatre! The Allies landed nearby during the Second World War and in a cafe opposite the ruins, photographs depict lines of soldiers walking silently by the immense Doric temples.
Links: en.wikipedia.org
987 views