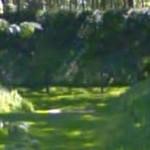 By Dania @ 2010-07-26 11:17:23
@ 55.724367, 12.564676
Hellerup, Denmark (DK)
During the Second World War, the German occupying power executed members of the Danish resistance movement on this location. After the liberation the site was converted to a cemetery and memorial park for the resistance members who were executed there. The condemned were tied to one of the "silent poles" at the end of the firing range and executed by firing squad.

Members of the resistance groups Hvidsten-Group and Holger Danske-Group were executed here. Before the executions the condemned were held at Vestre Prison in Copenhagen and around 5 AM they were driven here and shot.

Today 3 poles made of bronze stands on the site, the originals are on display at the Resistance Museum in Copenhagen. At the entry to the execution site is a memorial stone with a poem by Kaj Munk, a danish pastor who was murdered by 5 German SS-men
Links: drabssageridanmark.beboer2650.dk
983 views