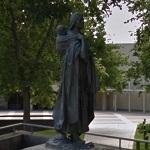 Sacagawea was born into the Lemhi Shoshone tribe in present day Idaho. At 12 she and several girls were kidnapped by a group of Hidatsa and taken to present day North Dakota. At 13 she and another Shoshone girl were taken as wives by Toussaint Charbonneau, a Quebecois trapper living in the village. In late 1804 Sacagawea would meet the Lewis and Clark expedition near Fort Mandan in North Dakota. She and her husband would prove to be invaluable as interpreters and guides to the expedition. Sacagawea earned honor and acclaim through the expedition while her husband earned a mixed reputation due to several incidents along the journey.

The statue shows her first child, Jean-Baptiste who was born on February 11, 1805 at Fort Mandan. He was taken by his parents across the country on the expedition.
Links: en.wikipedia.org
489 views