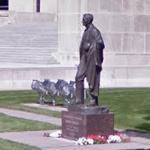 Burke was born in Keokuk County, Iowa, and moved to the Dakota Territory. After North Dakota was admitted to the union, he served in the state's House of Representatives in 1891 and in its Senate from 1893 to 1896. He served three terms (1907–1913) as the tenth Governor of North Dakota.
Links: en.wikipedia.org
824 views