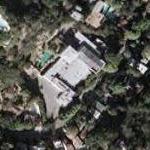 By kjfitz @ 2005-08-01 15:02:30
@ 34.108678, -118.38865
Los Angeles, California (CA), US
Lookout Mountain - For twenty-two years during the Cold War, the federal government operated a secret film studio in the Hollywood Hills, in a complex which has since been converted into a private residence. Called Lookout Mountain Air Force Station, the studio produced films from 1947 to 1969, for all branches of the armed services, as well as for the Atomic Energy Commission. Though this was the principal production facility for the films of the atmospheric nuclear testing program, only a few dozen of the thousands of films made here have been declassified. The self-contained filmmaking compound employed around 250 people, and covered 2.5 built-up acres, housing studios, film vaults, production areas and screening rooms. It is surrounded by residential structures in the eccentric and hilly neighborhood on Wonderland Avenue, five minutes from the Sunset Strip.

From 1994-2014, the house was owned by an attorney and his partner. They purchased the property for $750K back in 1994. The couple are longtime friends of the Getty family, and both Aileen and Balthazar Getty have stayed here for extended periods of time.